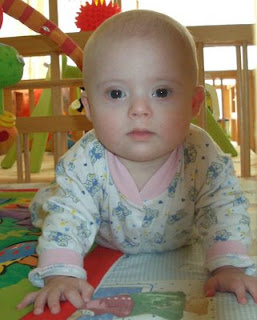 Yesterday, Kimberly Emelyantsev, 34, was sentenced to up to 15 years in prison for the March 2008 beating death of her adopted son Kolya. In August she was convicted of second degree child abuse homicide. At the request of the prosecutor, Emelyantsev was ordered to undergo a pre-sentencing psychiatric evaluation. Kolya was a "special needs" adoptee, with Down Syndrome and had lived with Emelyantsev and her husband Fyodor, a Russian national, for less than a month. The couple was also rearing K. Emelyantsev's 10-year old DS daughter and two biological daughters without disabilities. Two months before Kolya's placement they adopted a DS Russian baby, Luka.

That such a situation might prove "stressful" to the Emelyantsevs, especially stay-at-home Kimberly, was apparently overlooked or dismissed by their adoption agency About A Child, Reece's Rainbow who listed him, and the home study hack, probably out of LDS Social Services, who passed the couple for adoption. (The Es are LDS). After all, Fyodor had a MA in genetics, was trained in handling disabled children, and worked as an RN. The couple took out a second mortgage to pay for Kolya. Who could say no to that package?

In August, the prosector promised that more details of the case, which has received little attention outside of Utah, would be revealed at sentencing. So far we have only a short article in the Salt Lake City Tribune to fill in some of the blanks:

[Defense attorney] Williams said Emelyantsev blamed the death of the boy on a stressful home environment and the "pressures of a husband [32-year-old Fyodor Emelyantsev] who would not participate in an extraordinary familial situation."

Williams added that Kimberly Emelyantsev never wanted to adopt this child from Russia, but was afraid to say no to her husband and afraid of how it would look to others if she did not go through with the adoption

and details of the beating:

Emelyantsev initially claimed that out of frustration she deliberately dropped the baby twice to the floor on March 6. But during a recent diagnostic evaluation at the Utah State Prison, Emelyantsev admitted grabbing the child by an arm and a leg, slamming him to the floor, and then repeating the action.

Kimberly Emelyantsev did the deed and is worthy of the greatest punishment available to the state, But what kind of a man coerces his wife to adopt special needs children who he then refuses to help her care for? Nobody knows what went on behind closed doors in that house but the family. Perhaps if court documents and investigation reports are forthcoming that information will give us some idea. But, Fyodor Emelyantsev is complicit in Kolya's death.

Unfortunately, Feodor Emelyantsev is off the hook. Though never charged in Koyla's death, he and Kimberly had also been charged with child neglect for allegedly starving Luka, charges never fully substantiated and later dropped. At the time of Kolya's beating, Fyodor claimed to be on his computer in a back bedroom and was unaware of any problem until his wife brought the baby, who police described as "unresponsive and breathing very slowly" to him. Now, I have a 10 room house, and I'm pretty sure, short of a motorcycle race running down my street, I'd hear a baby being thumped on my floor.

The SLT did not report the current whereabouts of Fyodor Emelyantsev or the other children who were last reported living with nearby relatives. Kimberly Emelyantsev has agreed to voluntarily terminate parental rights to her surviving children.

Most of the questions I brought up after Emelyantsev's conviction have not been answered and are still relevant. Since this is Utah, they probably never will be answered.

and a couple more:


I have updated Forever Family--Forever Dead with this new information.

Posted by Marley Greiner at 7:23 PM