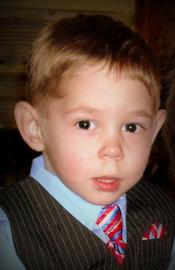 Russian media reports that another Russian adoptee has been murdered by his forever family.

Best coverage so far comes from RT (Russian Television) and the Siberian Times.  A few minutes ago, The Dallas Observer's Eric Nicholson picked up the story in his blog.  Although I'm seeing accounts from  the Australian , British, and Israeli press,  US media is so far silent, but I suspect that will change in a few hours.

RT reports that on January 21, a Russian adoptee identified as Maksim Kuzmin, 3,  living in Texas, died after a brutal beating at the hands of his adoptive mother. An autopsy showed that he suffered from severe trauma to his head, limbs, abdomen, and internal organs.  The autopsy also indicated that he was full of Risperdal, a  controversial anti psychotic drug approved by the USDA for treatment  for schizophrenia and bi-polar disorder in children over the age of 10,  but it has recently been used in the treatment of autism.

The  English-language Siberian Times identifies the boy by his adoptive name Max Alan Shatto.  The article (no byline) says that Maksim was born in the Komi Republic in the far north of Russia, west of the Urals.  Natalya Vishnevskaya, chief doctor at the Pechor Orphanage, identified the boy as coming from her children's home, but did not cite the adoption agency.  This is the same orphanage that sent Dima Yakolev (Chase Harrison  to the US--see sidebar.)  The adoptive parents are identified as Laura and Alan Shatto of. Ector County, Texas (county seat: Odessa).

The child was sent for autopsy. No arrest made, this is an ongoing investigation," sheriff's department spokesman Gary Duesler wrote in an email this afternoon. "Waiting on results of autopsy."

Texas Department of Family and Protective Services spokesman Patrick Crimmins says in an email that the agency is also investigating the death of the child, whom he identified as 3-year-old Max Shatto.

"In this particular case, the allegations reported to CPS were physical abuse and neglectful supervision, or simply, neglect," he wrote. "At the conclusion of an investigation, CPS will either confirm a finding, rule out a finding, or it will classify it as undetermined. So, there are two allegations in this case, and there will be two findings."

Not surprisingly, Konstantin Dolgov, the Russian Foreign Ministry's special representative for human rights, democracy and the rule of law, says that Ector County authorities  not the US State Department, which has made no comment on the case, has assisted the Russian government in investigating the death.
Maksim's obituary is posted on the Owens Memorial Chapel webpage

I'll make a  memorial page for Maksim tomorrow and will keep on this case. Russian authorities are discussing  further legal action.