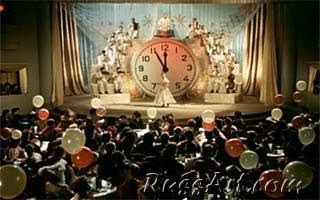 There's nothing like ringing in the new year with the classic Soviet New Year's film The Carnival Night. Made in 1956, the film is shown each year at New Year's on Russian television.

For the uneducated (which is about everybody west of the Baltic Sea) here is a synopsis of this great film:

It is the New Year's Eve and the employees of an Economics Institute are ready with their annual New Year's entertainment program. It includes a lot of dancing, singing, and even magic tricks. Suddenly, an announcement is made that a new director has been elected and that he is arriving shortly. Comrade Ogurtsov arrives in time to review and disapprove of the scheduled entertainment. To him, holiday fun has a different meaning. He imagines speakers reading annual reports to show the Institute's progress over the year, and, perhaps, a bit of serious music, something from the Classics, played by the Veterans' Orchestra.

Obviously, no one wants to change the program a few hours before the show, much less to replace it with something so boring! Now everyone has to team up in order to prevent Ogurtsov from getting to the stage. As some of them trap Ogurtsov one way or another, others perform their scheduled pieces and celebrate New Years.

Here is the show stopper performed by legendary Lyudmila Gurchenko in her first leading role. 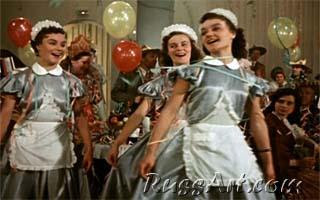 If you can't get enough of this, go to the trailer. (The clip above is included in it). Everything about this film rocks: the apparatchik, the songs, the sets, the costumes, the dancers, the music. The best big band show I've ever seen starts at 4:48. Even if you don't know Russian, you can get the idea easy. Just think: hey kids. Let's put on a show.