Dead Russian Adoptees: The White Book-- Russian resource on murdered Russian adoptees in the US 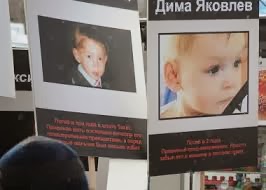 White Pqper (Book):Victims of Foreign Adoption is a Russian web source on the abuse and deaths of Russian adoptees in the United States and elsewhere.  It includes an English language translation The English, though,  seems to be done by bot and it's not totally reliable,  (ex. White  Book translates as White Paper) but gives a good idea of what is in the original.

I was unaware of this site until tonight. It appears to have gone up in February 2013 and is operated by childvictim.ru. . Click the  Persons tab and you'll find documentation of each Russian adoptee  death in the US. I have documented these cases on  Bastardette and  collected them on  my Nikto Ne Zabyt webpage but the White Book includes some information about original names, birthplaces and regions of adoption that I don't have. I'll be fixing my data shortly.

I learned about  this page through a video posted on the English language version of Monday's Pravda  accompanying  an article entitled Western child  protection  destroys children's s lives, for once not about the US.  The video is, though..  It reminds me that the Cold War is back on wrapped in the the Russian flag.

The video includes an interview d Irina  Bergset, the chief editor at childvictim.ru and founder of Russian Mothers. Bergseth   says there's a secret  a conspiracy afoot in the West  to  "appropriate" Russian children. (Berget, a Russian national, gained  quite a reputation in Russia after a Norwegian court removed her children from her custody and turned them over to her ex-husband in Norway who she claimed is a pedophile. She's made some pretty strange accusations about child welfare and Russian adoptions  I'm not sure what to make of her and I don't have time to delve into it.)

Another woman, Svetlana Smetania,  identified as a "observer of Pravda" whom I've also located as a reporter for Russia Beyond the Headlines, (who doesn't like the US  so much)  claims:

The principles of the American way of education include all children from Russia should be treated, in a very specific way.  They should be rolled up in a carpet  and adults should sit on top of them crushing them with their weight. In America this is a very common way to treat foster children.

Other therapies include  forcing "foster children" to live in dog houses and dig their own graves in the backyard  "on the advice of experts."  I suspect she's referring to Michael Pearl (or some iteration of him) who is only considered  n "experts" his  knuckle dragging christo-fascist fans,  The Pearl manifesto "How to Raise Up a Child" and other attachment  therapy books have been found in the homes of three four forever parents of murdered children, but to say that these "therapies" are common is misleading.  (.See my The Therapeutic Murders of Candace Newmaker, David Polreis, Viktor Matthey, and Jessica Albina Bennett.

No one. of course,  can deny the  gross  mental and physical abuse inherent  in attachment therapy  It has  come under close scrutiny lately, and extreme "treatments." such as rug rolling  are  widely  condemned.  After the death of  Candace Newmaker during a "therapy session"  in Colorado, the state outlawed the practice and sent the therapists to prison.

The video reeks of propaganda due to it's informants, Bergset and Smetania who have their own battles going, but that doesn't negate  the truth of it either or  the usefulness of White Book, Russia, however, is not the paragon of child welfare that it pretends to be, and it would be most helpful to shine a light on itself while shining the light on us.  Both countries are leaders in child abuse.

Posted by Marley Greiner at 5:06 AM